is a future Hall of Fame running back for the Seattle Seahawks who is currently eighth on the NFL’s all-time rushing list. A 2012 NFL MVP, 2012 NFL Offensive Player of the Year, 7x Pro Bowler and 4x 1st Team All Pro, Adrian is still adding to his decorated career as he chases down Emmitt Smith for the All-Time leader in rushing yards. After spending the first ten years of his career with the Minnesota Vikings, Peterson signed with the Washington Football Team in 2018 where he recorded his eighth 1,000-yard season of his career, tied for sixth-most-all-time. In his rookie year with the Minnesota Vikings, Adrian set an NFL record for the most rushing yards in a game with 296 yards and was named NFL Offensive Rookie of the Year. His stellar career only accelerated as he added more records and awards to his resume including 2007 Pro Bowl MVP, fastest player to reach 10,000 rushing yards in NFL in history in 2013 and the oldest running back to make first team All-Pro in 2015. Fans of Adrian’s hard-nose rushing style and uncompromising work ethic are delighted to see him still succeeding as he enters the 2021 season.

Peterson played college football at University of Oklahoma where he set the NCAA freshman rushing record with 1,925 yards as a true freshman. Adrian was a Heisman Trophy first-runner up in 2004 and finished his career third on the Sooners all-time leading rushers list. Off the field, he and his wife Ashley founded the Adrian and Ashley Peterson Family Foundation which works to eradicate poverty by giving families the tools they need to uplift themselves and their communities. 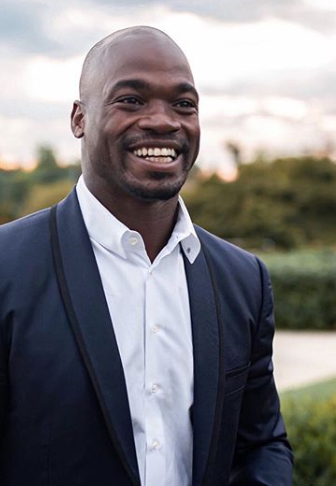