is a six-time Pro Bowl defensive end for the Baltimore Ravens. Calais spent nine seasons with the Arizona Cardinals, three seasons with the Jacksonville Jaguars, and is now entering his second season with the Ravens. His leadership and dominant defensive presence led to a career high 14.5 sacks in his first season with the Jaguars and is currently on pace for 100 total career sacks. He was named the Defensive Most Valuable Player of the 2019 NFL Pro Bowl.

In 2010, Calais and his family founded the CRC Foundation, named after his late father, Charles. The foundation is committed to the enhancement of the community by teaching life skills to assist with the development of young people. Through sports, the enrichment of creative talents, vocational skills, guidance of positive financial skills and quality health and nutrition, the foundation seeks to empower and provide self awareness for future leaders. In 2019, Calais was presented the Bart Starr Award which exemplifies outstanding character and leadership in the home, on the field, and in the community. The following season’s year, the NFL honored Calais with their most prestigious award, Walter Payton Man of the Year. This achievement honors a player’s volunteer and charity work, as well as his excellency on the field.

In 2015, Calais donated $1.6 million to the University of Miami to establish a scholarship in his name, the largest gift from a former student-athlete in the school’s history. Calais has also partnered with United Way and the NFL as a spokesperson to promote reading and the importance of education. Calais’ off the field interests extend to writing, producing, entrepreneurship, and broadcasting. In 2020, through his CRC Foundation, Calais pledged $125,000 to CLLCTIVLY and its COVID-19 Baltimore Micro-Grant Fund which provides financial assistance and advising to Baltimore Black-ownded small-businesses affected by COVID-19. 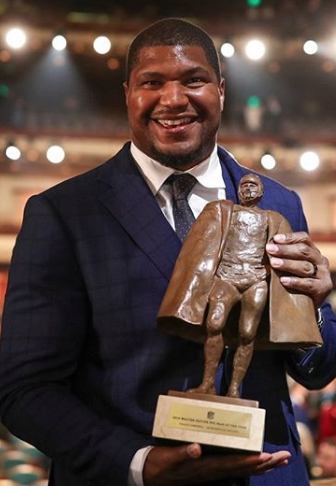