is entering his eleventh NFL season as a defensive tackle for the Arizona Cardinals. Corey played college football at the University of Kentucky and was selected by the Atlanta Falcons in the third round of the 2010 NFL Draft.  In 2015, Corey signed with the Arizona Cardinals and has been a constant force in the middle of their defense. His best season came in 2018 where he set a new career high in combined tackles with 51. Peters is continuing to lead by example on and off the field with his veteran demeanor and work ethic.

In 2012, Corey started the Peters Educational Enrichment Project which is used to make a difference within the communities close to him. Corey has been holding weekly reading sessions at South Pointe Elementary for the past two years and in 2019 will evolve those visits into a weekly book club, adding an additional book club at South Pointe High School to his outreach. PEEP is also dedicated to teaching and developing life skills while empowering future leaders. He has also been a spokesperson for the Rally Foundation which focuses on childhood cancer research, worked with the Atlanta Fire Department, breast cancer survivors during Breast Cancer Awareness Month, AirTran, Make-A-Wish Foundation and Children’s Healthcare of Atlanta. In the summer, Corey is dedicated to giving back to the youth in his hometown of Kentucky and Arizona. He holds two skill football camps specializing in developing offensive and defensive lineman at the high school level. This is a true passion of his that he is continuing to grow each year. 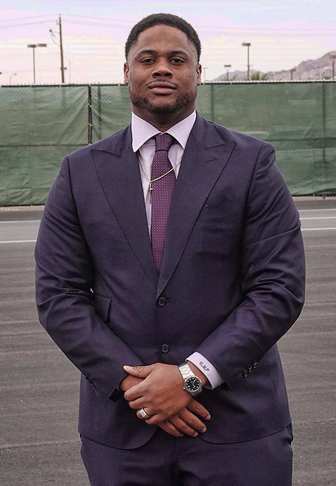