is a defensive tackle for the Washington Football Team. He was drafted out of the University of Alabama, 13th overall in the first round of the 2018 NFL Draft. In his first two seasons at Alabama, Payne established himself as a key player along the defensive line helping his school to a National Championship in 2015 as a true freshman. He was named to the Freshman All-American team and selected to the U.S. Army All-American Bowl. Payne’s collegiate career took another step forward his junior year in 2017. He totaled 53 tackles, one sack, and one highlight interception touch return that will be remembered in the Alabama history books. Payne led the defense to its second National Championship totaling six tackles in the 2017 contest. He later declared for the 2018 NFL Draft after being awarded First Team All-SEC, Sugar Bowl Co-MVP, and College Football Playoff National Championship Co-MVP.

In his first season with the Washington Football Team, Payne finished the year with 56 total tackles, five sacks, and once fumble forced. He was named to the 2018 NFL All-Rookie Team and Pro Football Writers Association All-Rookie Team. In 2020, Daron was a key piece to the dominant Washington defense, finishing with a career-high seven tackles for loss, three sacks, and his first career interception. Being a strong force at creating pressure up the middle and stopping the run, he helped improve Washington’s ranking of stopping the run game from nearly last in 2019.

Payne grew up in Birmingham, Alabama and was a 5-Star recruit coming out of Shades Valley High School. Payne has a twin brother and a close relationship with both his mother and father. 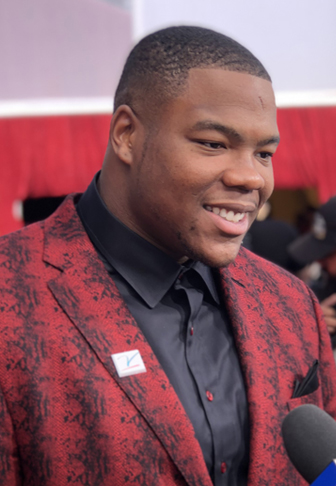