is a defensive tackle for the Tennessee Titans and was selected in the first round of the 2019 NFL Draft at #19 overall. Simmons attended Mississippi State University where he started 28 games and recorded 163 tackles, seven sacks, seven passes defensed and two defensive touchdowns. He was one of two players in the nation to be named a Bednarik Award Semifinalist in both 2017 and 2018. In 2018, he was awarded the Conerly Trophy, an award given annually to the best college football player in the state of Mississippi.

Since joining the Titans, Simmons’s blend of size, power, and quickness has propelled him to the top of the Titan defense. In his second season, he finished strongly with three sacks and 20 quarterback pressures, while also tying for the NFL lead with three defensive recoveries. After a dominant 2021 season, where he had a career-high 8.5 sacks and led the Titans with 58 quarterback pressures, Simmons was named to his first Pro Bowl.

Simmons grew up in Macon, Mississippi having attended Noxubee County High School. His brother, Dylan Bradley, played football at Southern Miss and professionally with the Minnesota Vikings. His uncle, Jason Hatcher, played 10 total seasons with the Dallas Cowboys and Washington Commanders. Outside of football, Simmons has a love for fishing and enjoys spending time outdoors. He enjoys giving back to the community, hosting food drives and Christmas giveaways for those in need. He also works with the Boys and Girls Club of the Golden Triangle. 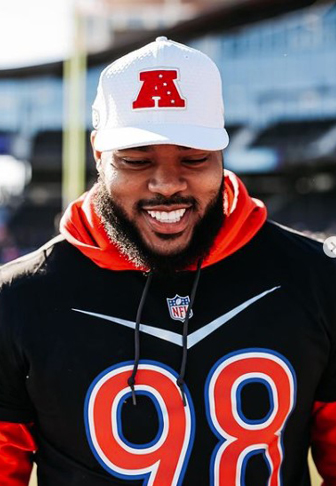